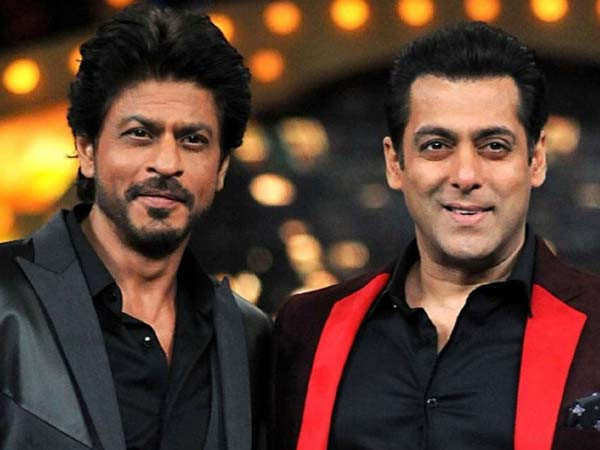 Salman Khan and Shah Rukh Khan are two of the most successful superstars of Bollywood. And it’s always a delight to watch them sharing screen space. The audience loved their brotherhood in Karan Arjun, Kuch Kuch Hota Hai, Hum Tumhare Hain Sanam till the recently released Zero. But if you want to pick out one film that has the essence of their friendship it is Rakesh Roshan reincarnation drama Karan Arjun.

Recently, a video of the two interacting and sharing some interesting behind-the-scenes fact about Karan Arjun has gone viral on social media. The two superstars were interacting on the sets of reality show Bigg Boss hosted by Salman. The duo recounted the time on the film’s sets when co-star Mamta Kulkarni gave them an earful for not rehearsing their dance steps for Bhangra Paa Le. Shah Rukh said that the director was fine with their dance steps but she didn’t like the way they were dancing. SRK also revealed that they practiced all night and rehearsed till 5 am in the morning.

Sharing the experience on Karan Arjun sets, SRK said, “She thought we did the step terribly. She did a good job, we messed up the song. Salman and I were standing, when she sharply whistled at us and made a beckoning gesture. Initially, Salman and I looked the other way, because we did not think she was calling us like that. So I went and she very clearly told us, ‘Look, please rehearse and come on the set because I am doing the step right but you are doing a terrible job”.

“We were so happy but when she scolded us, it was a huge insult. So we cheated, we used to stay up all night and rehearse till 5 am, but we would learn only the part that would be shot. After that, when we did the step for the first time, we got it right and she got it wrong)”, the Chennai Express actor added.

Check out the conversation between Salman and SRK here:

It has been a long time the actors have come together on the big screen. Last year, there was widespread speculation that the two superstars will be teaming up for a Sanjay Leela Bhansali film. Bhansali was planning to make a film with both the stars and even planned on releasing the film on Eid 2020. The rumour had begun when Nikhil in an interview had confirmed that Bhansali was working on a project involving the two stars, who had agreed to come together, and we were pretty excited about it. The project might have been put on a backburner for now, but we certainly hope that we will see the two acting together for a film.

In other news, Shah Rukh on June 28, completed 28 years in Bollywood. The actor thanked all his fans for their love on social media. Taking to Twitter, SRK penned a thank you note for his fans. “Don’t know when my passion became my purpose and then turned into my profession. Thank you all for so many years of allowing me to entertain you”.

He added, “More than my professionalism I believe my passionalism will see me through many more years of service to all of you. 28 years and counting.” Along with it, he posted a picture in which he is seen sporting beard and long hair. Thank you Gauri Khan for capturing this moment (sic)”.

On the work front, Salman has Radhe coming up, which will be followed by Kick 2. SRK, who was last seen in Zero, is yet to announce his upcoming project.

Master Of All! Shibani Dandekar Is All Praises For Beau Farhan...

Shraddha Kapoor To The Rescue

When Twinkle Khanna Was Caught Napping By Her Son Aarav

Actor Anshuman Jha Travels To The US To Get Engaged To...