Mira Rajput and Shahid Kapoor do not fail to give us couple goals. The adorable pair has been enjoying family time in this lockdown phase. Mira Rajput spoke about how life is different and gave a special thanks for all the domestic helps. She also had a special message for kids. Now, Mira Rajput has lavished praise on Shahid Kapoor. The reason being he ventured into the kitchen for the first time in five years. Shahid Kapoor made pasta for his wife and she says it is the best she has ever eaten. We wonder if this will motivate Shahid to experiment with his culinary skills. 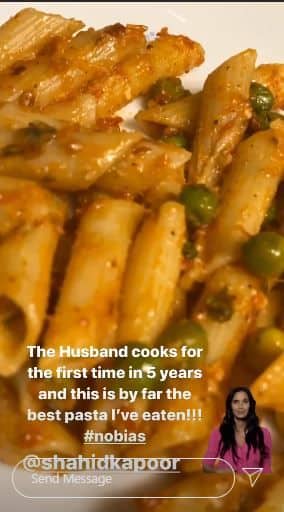 The actor was shooting for Jersey and it was stalled due to the COVID-19 pandemic. It is the remake of the Telugu hit starring Nani. This will be Shahid Kapoor’s second remake after the mega success of Kabir Singh. The actor is enjoying his domestic life ever since he married Mira Rajput. He has spoken about how nicely she has fit into his lifestyle. It seems Mira did not try to change her personality for anyone. It is something that has endeared him to her. The couple have two kids, Misha and Zain. Mira Rajput got married when she was just 21.

Shahid Kapoor had earlier told Filmfare, “She got married so young, had two kids and had to figure out how to deal with that when she was just stepping out of being a kid herself. She must have had her dreams and desires but she pushed those aside. That’s a lot to deal with. Also, the fact that we have an age difference, we are 13 years apart.” It was an arranged marriage. Shahid Kapoor and his father, Pankaj Kapur met Mira Rajput’s family at a Radha Saomi satsang and decided to build the alliance.

Here Are Five Beautiful Songs From The Indian OTT Space That...

Sunny Leone Enjoys A Chilly Morning At The Beach, Shares A...

Tahira Kashyap on completing her fourth book: ‘Women will relate while...

Rakul Preet Singh: I Totally Believe In Institution Of Marriage

Lootcase Drops Today On Disney Plus Hotstar At 7:30 PM