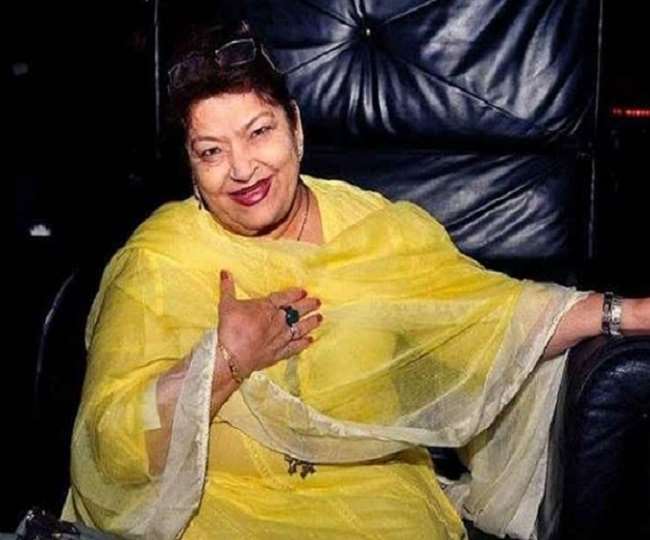 I was born in 1948. My father was a rich, educated man in Pakistan. When they left, they lost everything. I come from an orthodox family but I turned out to be a freak! I used to see my shadow and dance. My mother thought I was a retard and took me to a doctor who told her ‘she just wants to dance, so let her dance.’

The doctor suggested that she put me in the film industry since my family needed money. I had to take care of everyone in the house.

In my first film, I did not get to dance. I played the young Shama in the film Nazrana. I had to sit in a moon and sing. I started getting more offers and became very popular as a child artist, but soon reached an age where I would not get more roles.

At 10, I joined a dancing troupe and danced for one-and-a-half years. [Choreographer]Sohanlal saw me dancing and made me his assistant. I was just 13. I choreographed my first song Nigahein milane ko jee chahta hai from Dil Hi Toh Hai when I was 14. It was picturised on Nutan. PL Santoshi [filmmaker Raj Kumar Santoshi’s father] taught me how to join movements and make them dance steps.

At 14, I had a relationship with Sohanlal, who was 43 then. I had two children with him, Raju Khan, who is a choreographer, and Cuckoo Khan, who died of liver complications. Since Lal was not ready to give my kids his name, I married a Pathan and had one child by him.

In between, I went to Kolhapur and became a Marathi dance director. Sadhna gave me a break. She took me as her own choreographer; I was the choreographer for the first film that she directed, Geeta Mera Naam starring Sunil Dutt and Feroz Khan. I have also assisted PL Raj in Inteqam because Sadhna was the heroine. After that, I started getting movies. I did big movies like Dost and I did the song Jat yamla pagla deewana in Pratigya.

In 1977, I left the film industry. I went to Dubai. I was 29. I stayed there for three years. I was looking after my brother and sisters and also my husband’s first wife’s son. I placed them all in good jobs and then returned. None of them were in the film industry because when my father was dying, he made me promise that I would not let my brother and sisters join the industry.

In 1980, when I came back. Zarina Wahab had heard about me, so, she called me for her film Jazbaat. It was Raj Babbar’s first film. I told Zarina, I will do the song for free, but if Rajshri Production likes it, they have to pay me the price I quote.

They liked the song — it was Ho goriya re — and I started getting work. I had been in the industry for a long time, but I was not famous. Subhash Ghai called me twice for songs for Vidhaata, but I had other commitments. Finally, I choreographed Pyaar ka imtihaan for him, on Sarika. He gave me my first big film Hero, where I did all the songs and everybody came to know that I can choreograph songs. There was this notion in the industry that a woman cannot be a master. Tezaab changed my career completely and there was no looking back. I became so popular that actresses started fighting over me.

Now, the time has come when they don’t want me. I have very sharp movements in my dancing which actresses nowadays find it hard to do. I feel actresses now don’t like to work with me; they have never said it. I started getting less work.

Dance choreographers nowadays don’t have the power to tell the actors to give the right kind of expression that is required during the dance, but I see to it that my actors dance well and with expression. All actors need to rehearse at least two days before the shoot.

If a song is extraordinary, then I myself dance as soon as the song plays, and whatever I do, my assistants follow. Within 20 to 25 minutes, a song is choreographed. But if the song is dull, and we have to pep up the dance movements, then it takes me from three hours to one day.

I composed Ek do teen in 25 minutes but Madhuri rehearsed for 17 days because she was not famous at that time; it was that song that made her famous.

Govinda is the best dancer, according to me. He can carry off anything, from serious to comic dance steps. Sanjay Dutt does know dancing.

Why Did It Take Kareena 22 Hours To Do The Mujra In Dil Mera Muft Ka In Agent Vinod?

Because she did not come for rehearsals. I taught her all the steps on the sets. She had no time, as she was on some outdoor shoot. On the sets, any song takes time. Actually, it’s not 22 hours… You can’t count like that. We shot for six days. The nazakat (softness) and adahs gone completely out of the industry; this generation has not seen it.

Throwback to the time when Kareena Kapoor Khan spoke about how...

Sameera Reddy On Body Shaming: I Tried To Lighten My Skin,...

Blockbuster Friday On July 31! How Will A Four-Way Film Clash...