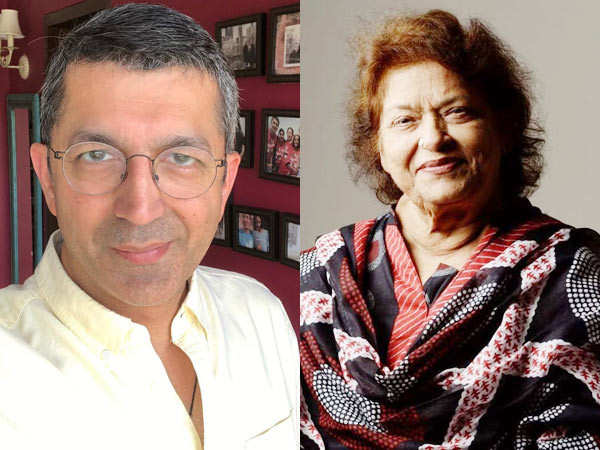 When I approached Saroj Khan for my music video, she was such a big name in the business that she never did music videos. But I was a fan of Saroj ji’s work, we all were. We have grown up watching those dance numbers in Yash Chopra’s film. I was in awe. I was directing the video of “Chhuimui si tum lagti ho” (1998) and asked her if she would choreograph the video. She replied, ‘Chalo theek hai, gaana to ganna hota hai, chahe music video ho ya film.’ That is how our collaboration started, as director and choreographer.

“Chhuimui si tum lagti ho” was a hit, and Saroj ji, whom I used to call ‘Masterji’, blessed me saying I can potentially become a good filmmaker. When I told her I would love to work with her in every film, she smiled and said, “naye bachhe sab shuru mein aise bolte hai, baad mein sab bhool jaate hai”, and smiled. I promised her to work with her again and of course, we continued to collaborate.

Thank you #IndianExpress for this wonderful photograph of #SarojKhan & me. Have no idea where you dug this up from.

There are several songs that we have done together — whether it is “Chand sifarish” and “Dekho na” in “Fanaa” or the title song of “Hum Tum”.

She choreographed about 20 songs in my films but never have I ever had a clash with her. Of course, there have been discussions. At times I would convince her, at times she would convince me. But there was no argument.

As we all know, she was a very transparent person who would say everything on your face. So if she loves you, you know it, if she is angry with you, be ready to get a firing.

She never discriminated between a star and a junior artiste. If you did not pay attention to a dance step, whether you are a star or a backup dancer, you would get a piece of her mind. I think one thing that she hated always was if you were ‘kaamchor’ (work shirker). If you didn’t get a dance step right, she would teach you until you perfected it. But she hated people without dedication.

It is interesting to notice how her choreography made every heroine beautiful. You can recall any dance and whether it is Sridevi, Madhuri, or Kajol — you recall the grace in their movements along with their expressions. Those expressions made them beautiful. I remember how Saroj ji would not ‘ok’ a take if she didn’t get the right expression right.

She always taught how to dance not just using your body but your face too. These days, kids are learning physical movements as dance so they are flexible. They move their hands and legs well, but with a blank face. Saroj ji discovered the beauty of a woman in her face, so in every choreography, we saw Madhuri, Sridevi ji through their face, a canvas that is filled with expression.

I will miss you Masterji.

Anil Kapoor Wishes Anand Ahuja; Says, ‘You Were Born To Be...