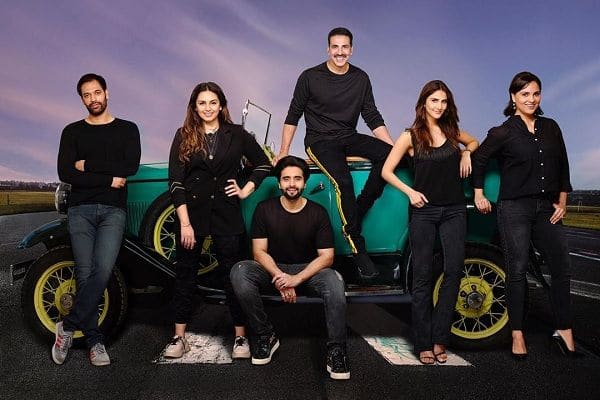 A few days back, makers of Akshay Kumar’s announced Vaani Kapoor as the female and now a new poster has been dropped by them, where we can see the ensemble cast, which includes the Khiladi of Bollywood along with the War actress and joined them are two gorgeous ladies Huma Qureshi and Lara Dutta. The new poster also features producer Jackky Bhagnani and director Ranjit Tewari. The film is set to go on floors in August in UK. Akshay shared the poster on his social media account and wrote, “Looking forward to doing what we do best! Time we get back to work! #Bellbottom to go on floors next month.
#VashuBhagnani @_vaanikapoor_ @iamhumaq @larabhupathi @ranjitmtewari @jackkybhagnani @deepshikhadeshmukh @onlyemmay @madhubhojwani @nikkhiladvani @emmayentertainment @pooja_ent.”

The story of Bell Bottom is inspired by true events and is written by Aseem Arora and Pervez Shaikhand. It is touted to be a very high-end espionage thriller. Akshay Kumar will be portraying a never seen before avatar and the makers are riding high on the content. Akshay Kumar earlier cleared the air that the movie is an original and not a remake of a Kannada movie. As one of the fans asked him on Twitter, ‘Remake of Kannada film?’ Akshay Kumar replied, ‘#BellBottom is not a remake of any film, it is an original screenplay inspired by true events.’

Did You Know What Inspired Anu Menon To Create Biopic On...

When Priyanka Chopra addressed on nepotism and said, ‘I was kicked...

Shraddha Kapoor Crosses A Huge Milestone As She Crosses 50 Million...

Radhika Apte Shares A List Of All The Things She Is...

The Trailer Of Sushant Rajput And Sanjana Sanghi’s Dil Bechara To...

Aashram teaser: Bobby Deol hits it out of the park in...